Alright, in all honest’s truth, I wrote this short piece on the history of the Silver Beach Amusement Park when I first began working at Shadowland in May 2014. Today I met a group of my girlfriends for lunch on the bluff of St. Joseph this afternoon though, and took a walk around the familiar stomping grounds. I absolutely loved my time at Shadowland and am now feeling extremely sentimental. I feel it is only appropriate to share with you a bit about the beginnings of the wonderful place I was able to call my work environment for awhile, as well as my hometown.

The town I grew up in is surrounded in whimsical history and entertainment. Once named the Most Romantic City in Michigan, St. Joseph also was home to the Silver Beach Amusement Park years ago. The lakeside town is centered in the Lake Michigan Wine Trail and offers a number of attractions for explorers, couples, and families. If you’ve ever wanted to experience small-town life in Michigan, look no further than St. Joe on your next vacation!

Below the bluffs of downtown St. Joseph, Michigan, hugging both the Lake Michigan shoreline and the St. Joseph River lays an area where carnival music was once heard, merry-go-round carousel horses galloped in place, a roller coaster roared, and Charleston dancers strutted their stuff. 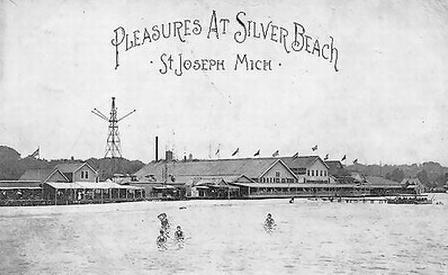 The St. Joseph area was a hotspot for boaters. Canoes, rowboats, and riverboats provided scenic tours from St. Joseph to Berrien Springs. Logan Drake, owner of a boat livery on the St. Joseph River saw a higher calling of tourism in the area and began looking at ways to draw more people to the less-popular beaches of St. Joseph.

Romance has always played a key role on Silver Beach. During one of their moonlit courtship beach walks, Drake’s bride-to-be, Maude Schlenker, coined the name Silver Beach saying the water “shimmered like silver.” This inspired a new concept with Drake’s tourism aspirations.

In 1891, Drake and his partner Louis D. Wallace established the Silver Beach Amusement and Realty Company with the intention of giving tourists more to do in St. Joseph. Initially, ten cottages were built along the beach as rentals for vacationers. By the end of the amusement park’s run 80 cottages were available.

To make the beach more popular for renting, Drake and Wallace invited local concessionaires to sell novelties such as swimming caps and lemonade in a barrel. Within months games of chance and a photographic studio emerged to allow couples to have their portraits taken. By 1896, an ice cream parlor, souvenir shop, and a pavilion which hosted dancing and a big band music were erected. Wooden stand and white tents could be seen up and down the beachfront. A couple of water slides were anchored in shallow water for children around the turn of the century. This marked the beginning of the Silver Beach Amusement Park!

The park continued to grow as the years passed. A wooden boardwalk was built above the Silver Beach sands to allow lake water to rush underneath. This boardwalk was a common place for courting couples to stroll at night.

Along the boardwalk were three buildings. The first building, the Natorium, housed a bathhouse and swimming pool, a rarity for the time. This was a dream of Drake’s to give beachgoers the option of swimming in either the lake or the heated indoor pool. The second was an open-ended roller skating rink which also housed Southwest Michigan’s first pipe organ.

The third building is allowed Drake and Wallace to capitalize on the growing need for a big dance hall among the twin city area of St. Joseph and Benton Harbor by constructing a dance pavilion in 1907. The hall featured two stages for bands which urged the “Battle of the Bands” to become a popular event on the beachfront. In addition to the dance hall, the House of Mysteries was built alongside the penny arcade and concession stands to provide entertainment for all ages at the Silver Beach Amusement Park.

As the park’s popularity sky-rocketed, Drake and Wallace added a variety of amusements. In 1905 the Chase through the Clouds rollercoaster was built. Utilizing several separate one- or two-person capacity cars, the “Figure 8” coaster, as it was known to be called, became a staple of the amusement park until it was torn down in 1923 and replaced by the Velvet rollercoaster. Additionally, the merry-go-round carousel first appeared in 1916, a bowling alley opened around 1917, and several “firsts” event day activities such as the first all-male bathing beauty contest took place on the beach.

The last improvement, and my personal favorite, was the building of the Shadowland Ballroom in May of 1927. Once it was completed, it became one of the finest dance facilities in the entire country. The Ballroom was decorated with 5000 yards of silk pongee stretched between arches that permitted natural lighting throughout. Ballroom dances were held seven days a week and were usually free, unless it was a big band night. It wasn’t uncommon to have over a thousand dancers on any one evening, and Silver Beach Amusement Park even staged at least one of the fad marathon dances during the 1930s. 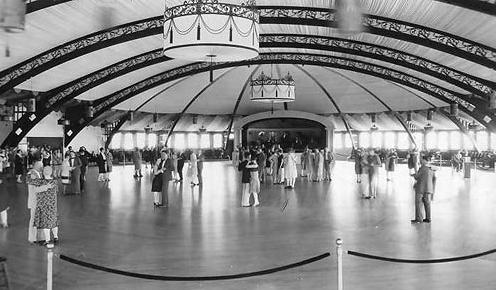 The old dance pavilion remained, but as ballroom dancing was becoming more popular, the Shadowland Ballroom was needed. The old dance hall was renovated into the Fun House. The House included a 35-foot Maplewood slide, revolving barrel, spinning saucer, sugar bowl, and a haunted house. The Mirror Maze was placed under the same roof as well. 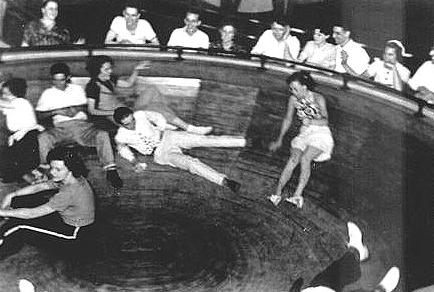 Drake made every attempt to change the amusement park to keep the attractions interesting and up-to-date. Silver Beach expanded with the debuts of The Whip, electric bumper car house, beer garden, Ferris wheel, and miniature diesel train called The Century Flyer. By the late 1940s the park assumed the look that would be its final face until its official closing three decades later.

During the 1950s and 60s, the park continued to evolve to the times. Kiddieland was created and featured rides customized for children too small to enjoy the larger rides. Miniature golf, go-karts, and various other carnival rides also came and went during these two decades. It was not until the late 1960s that Silver Beach Amusement Park’s popularity began to dwindle. The crime rate of the park rose significantly due to out-of-town teen gangs and the park’s congenial atmosphere decreased. After a particularly violent season in 1970, local police closed the park.

Another factor fighting against the park was its age. Extensive repairs were needed for many of the buildings that had stood in the park for over 70 years. With a costly estimation for repairs and improvements needed for the park to open in 1972, the owners of Silver Beach were left with no other choice and the park was closed permanently.

Many of the rides were sold to interested amusement companies throughout the country. Parts of Silver Beach made their way to Indiana, Texas, New Mexico, and Virginia. The remainder of the park was left abandoned for three years before the owner cleaned up and threw the historical pieces away. It wasn’t uncommon, however, to see couples still walking the crumbling boardwalk hand-in-hand among the ruins of the once-prestigious amusement park. 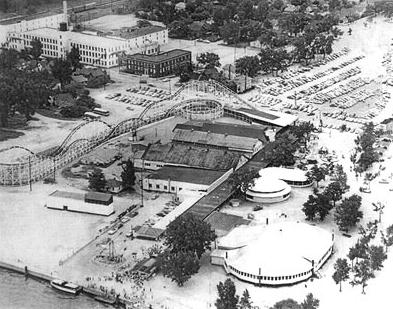 The spirit of Silver Beach is alive and well, though. In 2010, the Silver Beach Center publicly opened. Only a short walk from the expanse of beach sand and Lake Michigan, the Center offers a newly constructed Silver Beach experience. Walk through the doors and look up into Michigan’s tallest kaleidoscope. Take a stroll down memory lane by walking the boardwalk to the Silver Beach Carousel or Silver Beach Amusement Park Museum, or peek a glimpse of the Shadowland Ballroom. Curious Kids’ Discovery Zone offers excitement for kids of all ages with 15 water activities, a climbing wall, virtual reality fun, and traveling hands-on educational exhibits. Directly across the road from the Center is the Whirlpool Fountain which provides fresh, free fun to all the public. The community of St. Joseph is proud to continue a dreamer’s delight with this new vision of what Silver Beach is and will be.

If you decide to visit my quaint little hometown, I would love to recommend the best and tastiest restaurants and accommodations. Please comment below so we can connect.

5 thoughts on “Silver Beach, A History”